So here it goes, my first blog post.  I write posts all the time, just not for myself.  Always for my alter ego, which is studio manager at Echo Mountain Recording.  But enough about that place.  I love it, but it consumes my life and this blog is supposed to be the opposite of that.    I decided this first post would be about my adventures during the week of Moogfest.

I started my festivities on Tuesday night with a night out to see the ska band, the Toasters.  I was with a random group of people, first being my bestie aka my wife, Carson.  You’ll be hearing loads about her as she and I are quite like a retired married couple.  We do plenty of fun things but also spend plenty of time on the couch watching really bad tv.  We were invited out by JD and Tim, the guys who work on our houses for us.  Both in their late 50s, they made sure we knew if we met any young cute boys that they wouldn’t be offended if we decided to hang out with them.  Carson assured them that we were quite content to hang with a couple of old farts. And lastly, my buddy Carl joined us.  Carl is the distiller for Troy & Sons Moonshine and Whiskey Distillery.  He was bringing me some provisions for Moogfest and turns out, he’s a big fan of the Toasters so he jumped on the wagon.

I try to learn something new everyday and this day was no different. I learned that the term skanking is not just reserved for the activities of dirty girls anymore.  It’s a type of dance you do to ska music which looks like the running man sans rhythm.  It was a good time even if I wasn’t ever a fan of the band.  And what do you know, we also ended up hanging with some PYTs.

On Thursday, I was invited to a lovely dinner at Zambras with the fine folks from AC Entertainment and Google.  It was very nice of them to invite me out although while I think Zambras is amazing, tapas in not my favorite type of food.  I always feel like I get to just the smallest taste of something delicious.  It’s such a tease.  Have you tried the little potatoes? Oh that’s too bad, they were amazing.  There were 6 on the plate and 8 people at the table.  None the less, it was a good time with some interesting people.  We left there and went to see Justice at the Civic Center.  This was still pre-party for the upcoming weekend and not actual Moogfest festivities.  It was cool, the freaks were already starting to come out as we in Asheville love any reason to dress up.

We left there and I suggested we go to the Southern, to have a second dinner, because if there’s one thing I love, it’s late night food.  The guys were into it and we headed there as I spoke highly of the deviled eggs.  There are a few things that I love like it’s my job; my dog, the Golden Girls, and deviled eggs.  I will find any excuse to make them.  And I can make a damn good deviled egg without mayonaise.

We sat down and it wasn’t long before we ran into Les Claypool and Jay Lane from Primus.  The AC dudes knew them and introduced me.  I had such a great conversation with Jay.  He told me all about his family, his wife and kids and some pretty cool things about his mom, who adopted him as a single mom when that was something unheard back in the 70s.  He ended up leaving and I ended up hanging with the rest of the dudes until it was just Les and I.  He started giving me relationship advice.  Now here’s the thing, he’s been married for a long time, has two beautiful teenage children and has been out of the dating game for a quite some time.  So let’s just say I don’t think he’s the best person to take advice from.  I on the other hand, am a newly single woman, in my mid thirties who has never been married and yet I too, don’t know much about dating in today’s world. The first thing he pointed out to me was that I wasn’t getting any younger and I better hurry up and find myself a man if I want to have a baby. The thing is I don’t know if I want to have children or not.  But he seemed to think my biological clock was like a grenade that was about to go off and I needed to “shit or get off the pot.”  This is not his quote, but one from my mother that she loved to tell me as a child when I couldn’t make a decision.  The other little nugget he bestowed upon me was that I should join an online dating service.  I tried to explain to him that if he knew me he wouldn’t say that, that I’m not the type who would join a dating service because I have no problem meeting new people.  And I like the idea of meeting someone through someone, or bumping into them at the supermarket, something where you see someone, and you don’t know them and they make your heart race.  His stance was a dating service takes all the guessing out of it, that running into someone with your cart in the grocery store was great and all but it was going to take you some serious time to figure out whether you were compatible with that person. With a website, you are paired with someone with personal interests, weed out the guys that who smoked if you didn’t like that, do they have kids, etc.  While I agreed with him, I pointed out that people lie about themselves all the time and just because they put it on their profile doesn’t mean they aren’t a chronic nose picker, or that they’ll divulge their Precious Moments collection on their profile.  But then again, I guess when your biological clock is a ticking bomb, you might as well speed up the mating process as soon as possible, right?  Hard tellin’, not knowin’.  I’m sticking to my guns on the dating service thing, despite the fact that some of my friends want me to join.  I am not in the space to date anyway right now.  I have plenty to do and would rather spend my time doing other things.  Like writing this blog.  What would the three of you who read this do without my internet musings?  You should probably read a book…  While we were having this discussion, numerous people would come up to us and take our picture and buy us drinks.  I don’t know if you know this, but when you are sitting next to a well known musician, people will buy you drinks too!  And they take your picture because they are not sure if they should know you are not.  I kept telling people I was a back up dancer.

We closed the bar and I walked him back to his bus.  He invited me on to the bus, I joined for a moment, took the tour and then said that my mother always told me nothing good happens after 2 AM, especially on a tour bus.  I excused myself and went home.

The rest of my Moogfest was great although none of the stories are as good as this one.  It was a blast from the past to see Richie Hawtin and Carl Craig, reminding me of ye old rave days back in Detroit. Santagold was my favorite and made me really want to be a back up dancer.  If it wasn’t for this damn old lady hip, I would give it the old college try.

Here’s my proof that this actually did happen.  I don’t know how many other pictures I ended up in.  I only know of this one because it happened to be posted on twitter.  Good times. 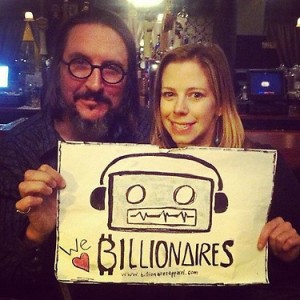