Here’s another story I shared as part of the Listen To This series at Asheville Community Theatre.

I usually end this story by telling people that I was born and raised in Detroit. I casually offer this information as an answer to the looks of horror and bewilderment that this story tends to solicit. The truth is I am really trying to make it seem that my brother and I were products of our environments, instead of the little monsters we really, truly were. 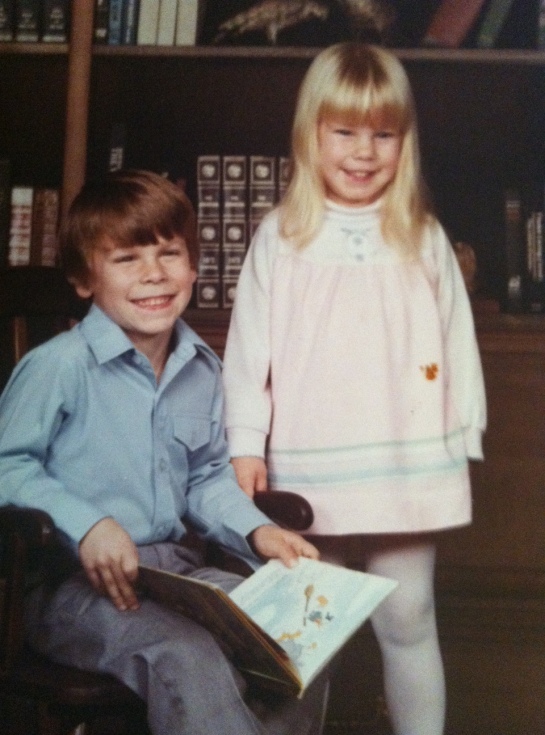 You see, my brother and I had already established a history of violence between us at a very young age.  We are two years apart and he is the older of the two.  We were continually doing so many things to one another, that it’s surprising that one of us didn’t lose an eye.  I mean, literally didn’t lose an eye.  When I was 5 and my brother was 7 I was trying to follow him to the neighbor’s house to hang out and he threw a flathead screwdriver at me.  He threw it, and from a pretty far distance I might add, and it came through the air and hit me right here, and stuck in my face. Just missed my eye!  I ran into the house screaming, ended up getting stitches….you get the point.

I was no angel though.  I had an affinity to dropping tonka trucks on my brothers face.  There was a time, when we were actually getting along and we were going to push one of his trucks down the slide together.  I climbed up on the top of the slide and he took the truck up, rung by rung and then handed to me at the top before he was about to join me at the top.  When he looked up to take the next step, I dropped the truck on him, watching him and the truck tumble to the ground.

I can say with certainty though, that he was much worse than I was.  Being the older of the two of us, he was definitely stronger than I was.  There were the times he would try to light the ends of my hair on fire. And many of my attacks were from getting sick of his shit.  And there was one night in particular that I had just about enough.

My brother and I were coloring on the hearth of our fireplace. I was coloring a Care Bears book and I think my brother was probably coloring a He Man book.  My mother was in our bedroom.  I say our bedroom because the three of us shared a bedroom.  After my parents divorced, my mom rented out our rooms and so the three of us slept in a king size waterbed together.  Oh, the 80s, waterbeds were one of the worst inventions of all times…..  There was a tiny color television in the bedroom with a coat hanger for an antennae.  This is were my mother liked to watch her “stories.”

So my mother walks into the living room and announces, “Tonight is the season finale of Dallas.  If either of you walk into my room during the next hour, you better be fucking dead.”

Now, I was six years old but I can tell you that these were my mother’s exact words.  This wasn’t one of those, “I will remember this for the rest of my life” moments.  It was more that she had instilled the fear of God in me.  She is a very patient woman but when she gets pissed off, you do not want to bear her wrath.  She would get this vein that would pop in her neck and you would know you were in for a serious ass whooping.

I would like to think she at least got through the first half hour without incident but I can’t really remember those details.  Just what happened next.  I was coloring and all of a sudden my brother took the purple crayon right out of my hand.  Now normally I would be pretty cool about just letting things go.  But I was coloring Share Bear Care Bear, and she just has to be purple.  She’s the one that encouraged people to share their feelings.  Well at this point I was ready to share my anger with my brother. We argued for about 5 minutes.  Then, all of a sudden, I don’t know what came over me but I grabbed a newly sharpened Number 2 pencil with my right hand.  Sharpened end pointing towards my pinky finger.  I then stabbed him right in the face, underneath his nose.  Not only did I stab him, I snapped my wrist so that the lead broke off in is face, leaving me a sharp pointy object as a weapon if I needed it.

His eyes got wide and as the shock wore off, he ran into my moms room with his hand over his mouth.  He opens the door to the bedroom and she turns around and I can hear her say, “Damn it Jason, this better be good!”  He removes his hand from his face to expose the piece of lead sticking out of his face.  I want to see what’s happening so I’m kind of careening my head from the hallway, while also hiding to see what she says.  The next thing I hear is, “Goddamn it.”  But at this point I began contemplating the deep amount of trouble I was about to be in.  My mom called the emergency room to find out if she had to take him in.  It turns out pencils had not been made of lead for quite sometime at this point and she wouldn’t have to worry about lead poisoning.  All she had to do was remove it and put a little peroxide on it.  What was I doing while all of this was going on?  What any other 6 year old would be doing, lying on the couch pretending to be asleep.  I figured, I can’t be punished if I’m asleep, right?

My mom came out after she took care of my brother.  I was just waiting to see what kind of ass beating I was going to get.  Was it going to be a pants on or pants off spanking?  What it going to be by hand or by belt?  First thing she did was tell me to go take a shower.  Not to wash the shame off, but most likely because I was disgusting.  I hated bathing as a kid and I guess my mom figured that I certainly wouldn’t put up a fight now since I was in such deep shit.  So I went to take a shower and then she did one of my favorite things.  She cleaned my ears.  I loved it when my mom would clean my ears.  I would lie on her lap and she was so gentle and it felt really good.  I was waiting for her to freak out on me, or yell at me, but she didn’t.  We talked about it and she realized that I had probably gotten to the point where I just couldn’t take the older brother pummeling anymore and just let him have it.  She did chastise me for STABBING HIM IN THE FACE, “Look” She said,  “This is one of the first of many times you are going to get fed up with some male’s shit” “But you can’t go around stabbing every boy in the face that makes you mad.  Next time you need to be the bigger person and walk away.  And if you’re backed into a corner, well then you just hit them in the nuts.”  They’ll recover eventually but they’ll remember the pain and normally don’t have to go to the hospital over sore nuts.”

The stab wound left a perfect blue mark on my brother’s face, which stayed there until he could grow facial hair.  Which regrettably for him was much later in life.  That blue dot would cause many of fights between us for years to come.  I think sometimes he would get teased at school about it and then come find me at lunch time at school and punch me.  Or I would taunt him about it myself which would end up in a beating as well.

That blue dot is finally gone and now my brother and I laugh about it.  I will say that we still have a tendency to want to beat the crap out of each other although it’s not very often.  We live in the same city now and see each other on a somewhat regular basis.  We verbally pick on each other but we don’t actually come to blows anymore.  We save that behavior for when Mom comes to visit. 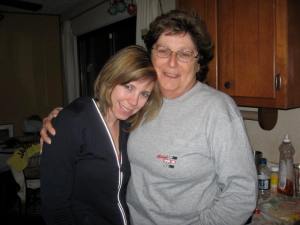 I was once again reminded this evening about how amazing my mother is.  She did so much with so little and I am eternally grateful for the sacrifices she made for my brother and I and what she taught me.  She sounds like June Cleaver right?  Well, not even in the slightest.  I say this as a precursor for the examples I am about to give to sick sense of humor and no bull parenting approach.

With my mother, what you see is what you get.  She doesn’t mince words and you never have to worry about what she’s thinking because she’ll tell you.  Often while growing up our conversations would start like this: “You know what your problem is?”  Sometimes I wouldn’t even get a chance to respond with something snarky before she launched into a full on psychological evaluation.  One of the funniest things, however, are my mother’s sayings and she also seems to have her own language.  Here is your warning now, there will be some explicit language in the post.  My mother likes to use the word Fuck as a noun, pronoun, advective, verb… you get the point.  So here are a few of the sayings that I heard frequently  growing up in our household.

“Want in one hand, shit in the other. See which one fills up faster.”  – Now, I’m pretty sure this saying is “spit in the other” because it’s supposed to mean that even though you can spit in your hand pretty quickly but you still can want a whole lot more. Alas, she took it and made it her own.

“Fuck ’em if they can’t take a joke.” – By far one of my brother’s and I favorite sayings of hers.  This saying wasn’t normally used if say, we were trying to pull a prank on someone.  It was more used if someone got bent out of shape about anything.

“Birth control is not a license to bend over.” – There is a whole other story to go along with this quote but you get the point.  The subtitle of this would be, “Don’t be a slut.”

“You’re so full of shit the birds won’t eat you.” – Needless to say, it was hard to pull one over on my mom. She always knew when we were lying.

“Your taste in all in your mouth.” – Whether she was talking about a pair of shoes my brother picked out or one of my boyfriends I brought home, it was obvious how she felt about our choice.

“Armadillons” – Yep, she calls armadillos, armadillons.  And she likes to hit them with her car.

“Colin Farwell and Justin Timberland” – Pronounced Coe-lin.  I think she thinks they are in a boy band together. Come to think of it, I’m pretty sure they are too.

I hope I haven’t given you the wrong impression.  My mother while she is very matter of fact and calls us out, she is very loving and supportive.  She’s my biggest fan.  At least she was until she reads this.  I can hear her now….